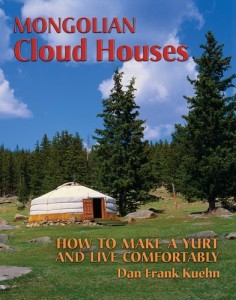 from Mongolian Cloud Houses, About the Author:

Dan Frank Kuehn grew up in the back of a North Dakota grocery store owned by his parents, Walter and Ann Kuehn.

In the summer of 1970, Dan, 19, and his brother Herb, 18, floated 2,000 miles down the Missouri and Mississippi Rivers, from Bismarck, North Dakota to Memphis, Tennessee, searching for adventure.

He became interested in yurts and Mongolian culture in 1975, encouraged by the flourishing northern New Mexico alternative lifestyle scene. After many models and experiments, Dan spent a few years living in yurts he built himself (1976–1980), and completed the writing and drawing of the original Mongolian Cloud Houses in 1980.

Then Dan moved to Maui, Hawaii, and for 20 years he worked as a landscape designer. Native plant landscaping and garden guest house managing were his main occupations when along came the opportunity to revive his book on yurts.

He re-immersed himself in the subject. With the encouragement of his editors, Dan began an extensive rewrite to update the material and expand the scope of the book, with the addition of many new illustrations. Mongolian Cloud Houses is back, a romantic yet practical introduction to this ancient, elegant, nomadic dwelling.